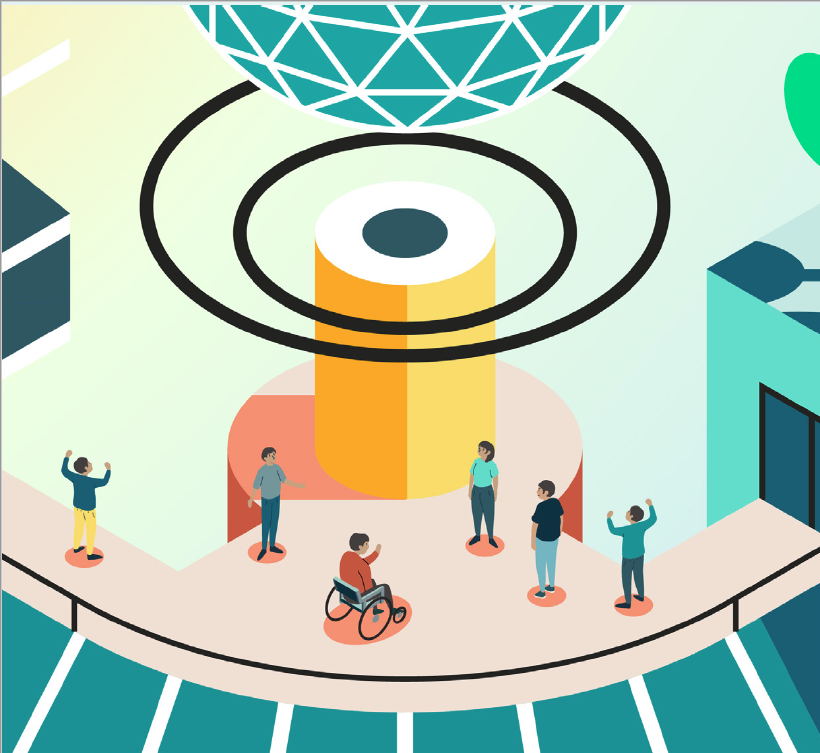 THE STATE OF EUROPEAN TECH

Looking back at 2021, giving us hope for 2022! We have summarized facts from the The State of European Tech.

5 years ago, you could fit all of the continent’s unicorns in a dining room and decry Europe’s missing tech giants. Today, you’d need an auditorium with 321 seats and you’d hear a completely different story. — John Collison, Stripe | Co-founder & President

Tech is arguably going through the most meaningful paradigm shift in history globally, with perceptions of its role in the economy and society shifting. It is easy to underestimate the rate of progress this is driving.

No one blinks at $100M+ funding rounds anymore.
2021 saw 57 rounds of $250M+, which is close to double the number achieved in the previous three years combined; a new record in European tech history.

In times of crisis and uncertainty, we often see a wave of innovation – and this seems to be what has happened in European tech over the past two years. — Maria Raga, Depop | CEO

$100M+ rounds per country
The growth of mega rounds is far from a UK-only story. Germany, France, Sweden, the Netherlands and Spain have all set new records before the year even finished. 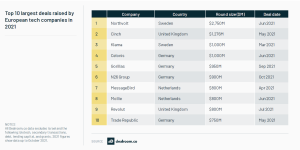 Not only are there more unicorns in Europe; they are scaling faster.
Europe has now seen unicorns emerge from 28 different countries across Europe. Latvia and Cyprus are the most recent addition to this list. 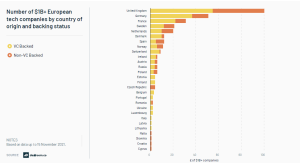 Trends that we believed would take 10 years to fully materialise have happened in just two. Our continent is set up to make the most of that opportunity. — Georgi Ganev, Kinnevik | CEO

Put together by Atomico and Slush. Read their full report here. Data contribution from DealRoom.

Close Menu
We use cookies on our website to give you the most relevant experience by remembering your preferences. By clicking “ACCEPT ALL”, you consent to the use of all cookies. However, you may provide a more controlled consent by clicking on "Cookie Settings".
Cookie SettingsREJECT ALLACCEPT ALL
Manage consent

This website uses cookies to improve your experience while you navigate through the website. Out of these, the cookies that are categorized as necessary are stored on your browser as they are essential for the working of basic functionalities of the website. We also use third-party cookies that help us analyze and understand how you use this website. These cookies will be stored in your browser only with your consent. You also have the option to opt-out of these cookies. But opting out of some of these cookies may affect your browsing experience.
Necessary Always Enabled
Necessary cookies are absolutely essential for the website to function properly. These cookies ensure basic functionalities and security features of the website, anonymously.
Functional
Functional cookies help to perform certain functionalities like sharing the content of the website on social media platforms, collect feedbacks, and other third-party features.
Performance
Performance cookies are used to understand and analyze the key performance indexes of the website which helps in delivering a better user experience for the visitors.
Analytics
Analytical cookies are used to understand how visitors interact with the website. These cookies help provide information on metrics the number of visitors, bounce rate, traffic source, etc.
Advertisement
Advertisement cookies are used to provide visitors with relevant ads and marketing campaigns. These cookies track visitors across websites and collect information to provide customized ads.
Others
Other uncategorized cookies are those that are being analyzed and have not been classified into a category as yet.
SAVE & ACCEPT